The beginning of the Lunamar Tribe

The beginning of the Lunamar Tribe

Isla Mujeres: The story of energy, myths and signs.

It was the night before a full moon, when four different women, from four separate
countries, Columbia, Argentina, Scotland and the U.S, came together for a higher cause, a
greater meaning. It all started with a song, a very popular one that came out in the late 90’s “I
saw the sign, it opened up my eyes, I saw the sign.” These lyrics seemed to be reoccurring in
our heads before we even got to our destination, little did we know, we would be greeted with
many signs as soon as we arrived.

Having met on different journeys through our travels, we each were looking for the
same thing. A sign, a reason, something telling us that we were exactly where we needed to be.
As we arrived on the island, all meeting at different points, we gathered together at the beach.
The turquoise water shimmered as we bathed in the sun. Each of us, one by one took turns in
the water, coming out feeling like goddess’s. It was like a a magical spell had been put upon us,
time slowed down, all you could hear was the way the waves gently kissed the beach, you could
not help but just smile. A true mediation this was, it was this first sign that we all realized, to
slow down, to look around, that we are given these moments everyday, we just have to be
open enough to receive them. Whether it be the ocean, the wind, the trees, the rain, a child’s
laughter, every day nature blesses us with these moments of clarity. The four of us were so
lucky to find it and rise together in it on that very special day, together as one, together this
was a beginning of a tribe.Isla Mujeres has many myths as to how the island came about of its name and the
dedication it has to women. From pirates using Isla as a refuge, which they would leave the
women whom they beloved on the island, awaiting their return. As to another story which
resonated with all of us, one that had appeared right before our eyes, this became, our second
sign.
As we began to wander these magical streets, Femenina Sube had made her way to us.
A mosaic art project had been designed by a beautiful woman whom goes by the name of Batya
Weinbaum. It was there that we learned the history of the Goddess Ixchel.
Ixchel was the Goddess of fertility, reason, medicine and the moon. It is said to be told
by the mayans, that the island was served as a sanctuary for Ixchel. As followed in the article
below Weinbaum quotes, “We create discussion about the goddess energy on the island, and
about how in the Aquarian Age, this feminine energy needs to rise again, in whatever the
form.&quot; We all looked at each other, nodding our heads that this is why we were brought
together, to rise in our feminity. For more history and information of Weinbaum’s beautiful
masterpiece please visit her site below.
As we continued our walk and gave our gratitude to the wall, we came across our third
sign. A sacred space had been created for visitors to write messages as they passed through,
and there it was waiting for us, a message to be exact that was signed and dated on that day.

“You are the poem, the song, the beauty, the light, and the reflection, the countless
gem shimmering, you are what you have been longing for.” Nancy Neithra, 3/22/16.
Wherever you are in the world Nancy, if you ever come across this blog, thank you! 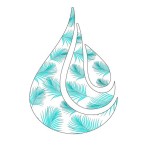 The darker side of the Galapagos Islands in Ecuador

Hope For A Generation